Bluffdale is the first city to pass the Financial Ready Utah resolution.The resolution was passed on Tuesday, Feb. 26.

Councilman Bruce Kartchner, a CPA, says, “We have a mayor and city council that are fiscally conservative. They recognize the prudence of contingency planning related to federal funds and they wanted to show their support for the ideals being promoted by Financial Ready Utah.

The mayor and council recognize that the financial path that the federal government is currently taking is not sustainable.  They believe that every individual, household, business, municipality, and organization should become aware of the financial implications of current government policies.  With that knowledge we all can help shape policies that will ensure that our state and local governments remain financially fit.”

Are you interested in passing this resolution in your city, please get in touch at info@financialreadyutah.com.

Kent Thomas, President-Elect for the Utah Association of CPAs, joined Rod Arquette to explain the Financial Ready Utah initiative and discuss the importance of getting involved. The interview is from 17:05-24:00 minute marks.

If you didn’t make it to the Feb. 12 press conference introducing Financial Ready Utah, here is the complete video: 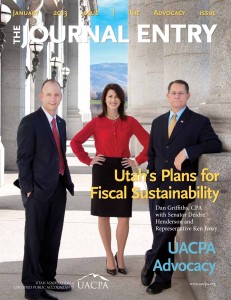